It is half past five in the morning in Tamraght, a small village in the South of Morocco, near Agadir. Through the megaphones of mosques, one can hear, from hundreds of meters away, the voices of muezzins, Muslim men in charge of the call of the believers to the prayer. Arabic, Berber and a multitude of foreigners from different religions and nationalities begin the day under the hard African sun with the same awakening, the verses of the Koran. Girls and Muslim women walk on the narrow streets with their hijabs, the generally used veil within the Muslim community that covers their hair, ears and neck, allowing only the ovals of their faces to be seen. The women practice this norm while they run into European, American, Asian, young people who naturally show their little covered physical appearance. Although they are all women, certain men do not look at them with the same eyes as they look at the local women. This is the way the day gets up on Morocco. girls surf 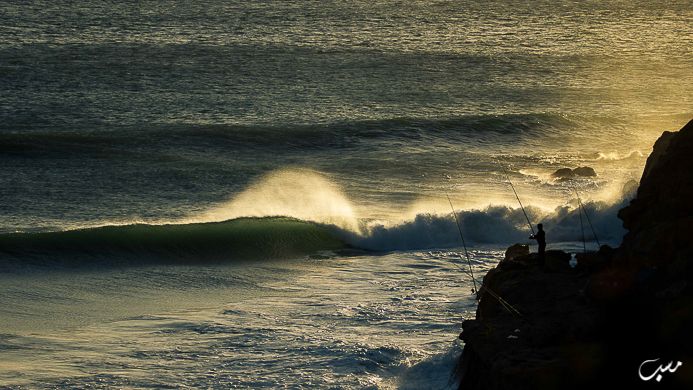 “The Moroccan coast is more and more frequented by tourists who travel in search of perfect waves and stunning landscapes. Surfing is one of the main activities on south Agadir beaches”

Due to its littoral, diversity of suitable waves for all kinds of levels, its exoticism of a different culture, its gastronomical cuisine and its Moslem culture, Agadir’s coast serves as a cultural maelstrom, and especially from October to May. At fourteen kilometers from Agadir, the village of Aourir, also called Banana due to its abundant banana plantations, is only a kilometer north from the village of Tamraght. Like the contiguous village of Taghazout, more than half of the youth devote themselves to the surfing world. Many villages live mainly off this type of tourism, thanks to the diversity of surf schools, hotels and restaurants.girls surf

No matter which surf school is chosen, the majority of them propose the same programs. Youssef Drouich is a berebere who lives between Tamraght and Imsouane, a fishermens’ village to the north of Agadir, and is a founder of one of these schools, Travel Surf Morocco; a school often frequented by foreigners of all nationalities during the winter. Drouich wakes up every morning to a prayer to start his day before going to watch the sea and attending to his clients. Ever since his childhood, he was a lover of the ocean and he would escape college to go diving, fishing, or with a wood, taken from the rubbles, to make his own surfboard. He always liked to read and took interest in other cultures that were not his own, and continues to expand this interest as every week he receives surfers from around the world. Men and women who want to learn this sport approach him year after year, for his improvement and evolution. Throughout his career as a surfer, in very few occasions did he share waves with Muslim women. Though he does not voice it, he believes that the Arabic men generally regard riding waves with a surfboard as a sport for men. girls surf

In the Muslim tradition, it is not decent for a woman to surf for many reasons. Firstly, for security reason, the man is very protective of the Muslim woman and, as a result, it is not correct to mix both sexes in the activity. This practice is avoided in the Hchouma, a moral code that implies that something is shameful for a family. In addition, surfing has always had a bad reputation because, at the beginning, it was practiced by hippies and it was associated with the consumption of certain drugs. Furthermore, in Morocco a great part of the people who live at the edge of the sea cannot swim and the women rarely go to the beach, for fear or for decency. girls surf

Nevertheless, little by little this is changing. Though it is rare to see Muslim women in the water, it is becoming more frequent day by day. With the mass media, surging has become a sport that is more recognized, respected and valued. Nowadays, the women generally practice it with more assiduity and passion. The girls travel alone to Arabic countries and, little by little, are more accustomed to sharing the sea with men.girls surf

Throughout the years, men like Youssef D. have helped women who have wanted to practice the sport in his country, both foreigners and locals. He emphasizes in that the security in the water for a woman is very important and she must feel safe. He accompanies his clients and friends on beaches to which they would have, otherwise, never approached alone.

Nadia Elghalia Ben Abdelkhalek shares waves with him mostly in Imsouane’s bay. With Moroccan decent, Nadia was born in the village of Safi, in a simple and humble family. Her mother was a teacher and her father, a merchant. She began surfing in Oualidia, a settlement where she would spend the summer when she was a child with her family. She would admire the surfers who would give her their surfing materials as they would exit the water. One day, while she was having dinner with her parents and brother, she asked her father to buy her a wetsuit for surfing like her brother, to which he answered that this sport was only for men and not for women. In her family, surfing was a pastime practiced during the summer, and when this was over, so was the entertainment from the water. It was hard for Nadia to make her father accept that she would spend every day at the beach, and this became a battle for years. In her father’s opinion, a girl had to be in the house completing domestic tasks, concentrating on her studies, and had to be polite and well protected. She always had certain differences regarding her brother, which she did not like, and started to rebel against them. Her daily influences were built by surrounding herself with boys and she was moving towards a more masculine sports environment, as she was not interested so much in the “proper” activities practiced by girls. She was the only girl who practiced surfing in Safi and she affirms that, to this day, she continues to be one of the very few. She considers the feminine surf in Morocco to be not very developed, apart from cities like Casablanca and Rabat, where families are more open minded and take their children to surf schools, which is not the case for many families in Morocco. She emphasizes that the more one goes towards the south of Morocco, it is more likely to meet a few girls who surf. However the amount of women who surf in Morocco remains scarce. Girls surf

The temperature in Tamraght is around 32 degrees and Leila Q. walks along the beaches completely covered. Only her hands and the face are visible. She has never worn a swimsuit and, even less, has ever gone in public without her hijab, under any circumstance. If she wants to refresh herself, she does so dressed, but very rarely approaches the beach because she is consumed by the “women tasks” that need to be completed. She has never thought about surfing, as her father would not look favorably upon this and believes she would dishonor herself and her family. 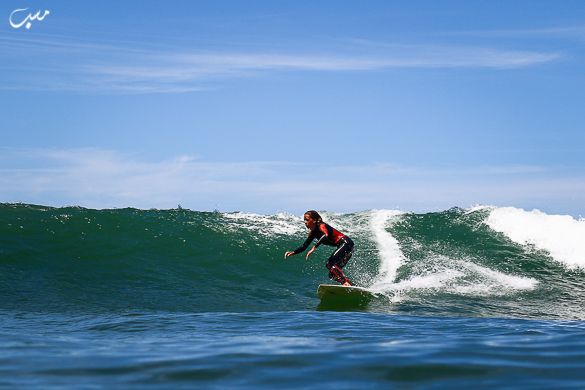 On the other hand, Widad Radi is a Moroccan young woman who was born in a very open minded family with parents who have the soul attached to the sea. Her father had an important political cargo in Agadir and he liked to go fishing. Widad remembers her childhood as being close to the sea. For her, neither the Muslim culture or her family were a barrier for surfing, which is her passion. The only fear of her parents was that something would happen to her in the water. The young Moroccan started surfing with more fervor when her father died. She liked to revisit the places he had once taken her to fish and look for rocks where they had spent so much time together. Nowadays, she likes to sit on her board waiting for the waves, reminding her of the person who had taught her to love nature and the ocean.Girls surf

Throughout the day, foreign young women walk in bikinis on Tamraght’s beaches. They laugh and share waves with Moroccan locals. It has become more common for non-locals to show their bodies and more women are starting to enjoy the water. Muslim women observe this with absolute respect and a smile to the girls on the beaches, as they have become more accepting. The religion is a fundamental aspect of the Muslim culture and at school. They come out of the water to pray five times a day and then continue to teach surfing lessons. girls surf

“It is getting dark in Tamraght and while we heard on the background the call to prayer, the last girls go out of the water with the sunset.” 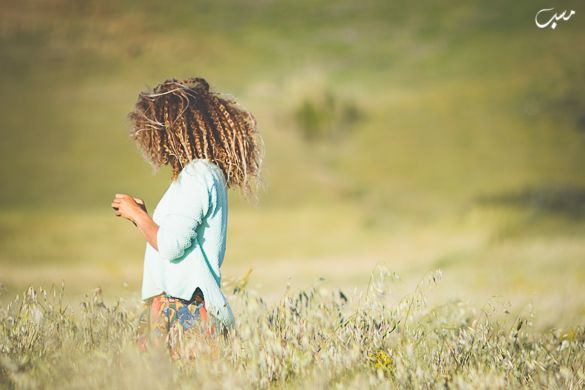 The Islam has never prevented the practice of this sport for women, not even sharing the sea with men. Certain parents of family restrict their daughters to do it because for them, it supposes something shameful and not decent. Finally, to enjoy the sea is a choice of each person and the important thing in Morocco like in so many other countries in the world, is that the women acquire autonomy to take her own decisions. To maintain their customs and to respect them, it is one of the values most admired in this country and it is what will give freedom to the woman for they could emancipate themselves in an Arabic country. And it is for that, in no place of the universe, the sea deals with no genders. Girls surf

Article posted on Surfemme, and written by María Basa Ozores.